To supplement our May 1, 2020 article, New Developments Impacting Bankrupt Debtors in Applying for PPP Loans under New SBA Authority, decisions are beginning to come in from courts around the country grappling with the scope of the Small Business Administration’s (SBA) authority to deny bankrupt debtors Paycheck Protection Program (PPP) funds under the CARES Act. On May 1, 2020, several courts issued opinions both for and against the SBA with many more opinions pending. And while early, the following cases are establishing important authority for future decisions: 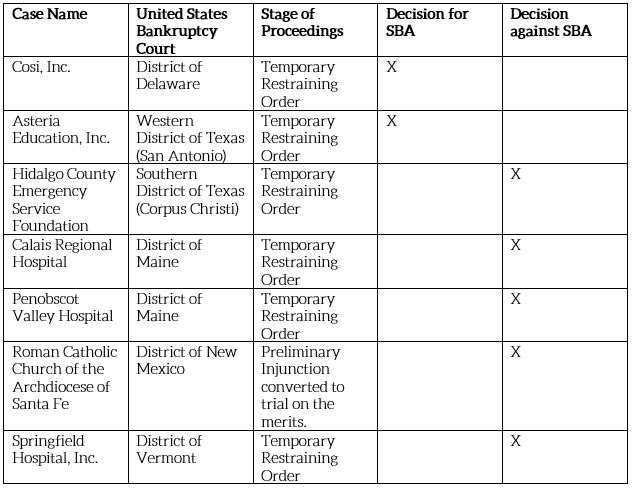 For a discussion regarding the courts’ decisions in Cosi, Inc. and Hidalgo County Emergency Service Foundation, please see here. As of this writing, no opinion has been formally entered by the Cosi, Inc. and Asteria Education, Inc. courts. Accordingly, our analysis is limited to those decisions in favor of the SBA.

In the recent cases of Calais Regional Hospital, Penobscot Valley Hospital, Roman Catholic Church of Archdiocese of Santa Fe, and Springfield Hospital, Inc. those courts have found, seemingly with ease, that (1) the SBA’s interim final rule precluding bankrupt debtors from receiving PPP funds is arbitrary and capricious, (2) the SBA has exceeded its rulemaking authority under the express terms of the CARES Act, and (3) in failing to distribute PPP funds to businesses solely because of their status as debtors in bankruptcy, the SBA has discriminated against debtors in violation of Section 525(a) of the Bankruptcy Code.

On May 1, 2020, Judge Michael A. Fagone entered two, virtually identical, orders in favor of two debtor hospitals. In these cases, the SBA argued that its Administrator and, by extension, the SBA was immune from the debtor hospitals’ claims for preliminary and injunctive relief under the anti-injunction provision of 15 U.S.C § 634(b).  Judge Fagone dismissed the Administrator’s defense, noting that binding First Circuit law established that the anti-injunction language “should not be interpreted as a bar to judicial review or agency actions that exceed agency authority where the remedies would not interfere with internal agency operations.”

Judge Fagone determined that the debtor hospitals’ requested relief — orders invalidating the SBA’s decision due to the Administrator’s asserted failure to comply with applicable law — was not the kind of relief that would interfere with the SBA’s “internal workings” as distinguished from the “product of those workings.”

Having dismissed the Administrator’s immunity defense, Judge Fagone considered whether the debtor hospitals were entitled to the requested injunction and answered that question with an unequivocal “yes.” Judge Fagone found that the SBA’s refusal to extend funds to bankrupt debtors likely violated Section 525(a) because, in his view, the SBA is not administrating a loan program under the PPP but is rather administering a grant program.

Moreover, the Court expressed concern that the debtor hospitals were at risk of immediate and irreparable harm if they did not receive PPP funds. Judge Fagone highlighted the importance of the hospitals’ services in their communities, describing the hospitals as “critical access” hospitals and that, without PPP funds, the hospitals were likely to cease operations as early as June.

Judge Fagone will hold a status conference to assess the SBA’s compliance on May 5, 2020.

Judge David T. Thuma focused on three areas of inquiry in rendering his opinion, specifically, (1) whether the SBA’s refusal to extend PPP funds was arbitrary and capricious, (2) whether the SBA had exceeded its statutory authority, and (3) whether the SBA actions discriminated against the debtor within the meaning of Section 525(a) of the Bankruptcy Code.

Judge Thuma cast considerable doubt over why an applicant’s status as a bankrupt debtor would more accurately gauge a borrower’s likelihood of complying with the PPP. In concluding that the SBA’s exclusion was, indeed, arbitrary and capricious, Judge Thuma dismissed what he characterized as the SBA’s only defense – that bankruptcy debtors “present an unacceptably high risk for an unauthorized use of funds or non-repayment of forgiven loans” – as “completely frivolous” (citing Judge Jones). Based on the foregoing, Judge Thuma concluded that Congress did not intend to exclude bankrupt debtors from the PPP and, thus, the SBA’s exclusion of bankrupt debtors was arbitrary and capricious.

Judge Thuma then found that the SBA had exceeded its statutory authority, finding that the SBA lacked authority to change the PPP eligibility requirements to exclude the Archdiocese of Santa Fe. Lastly, Judge Thuma found that the SBA’s actions violated Section 525(a) citing, again, his analysis that the PPP is not a loan program, but a grant or support program.

Judge Thuma’s opinion is direct, and this is certainly not lost in the final paragraph of his opinion relating to his granted relief. This, importantly, being an order on a preliminary injunction (as opposed to an order granting temporary relief), Judge Thuma stated that “Plaintiff may file an adversary proceeding for compensatory and, if appropriate, punitive damages” if the Archdiocese of Santa Fe does not obtain the $900,000 in requested PPP funds. Accordingly, Judge Thuma’s order sets the stage for potential future relief post-preliminary injunction stage.

First, Judge Brown disposed of the SBA’s defense that it was entitled to sovereign immunity from the debtor hospital’s Section 525(a) claim. In doing so, Judge Brown cited her sister court’s opinions in Calais Regional Hospital and Penobscot Valley Hospital cases, as well as binding First Circuit precedent, in support of her finding that the temporary relief sought by the debtor hospital would not interfere with the SBA’s internal agency operations.

Moving to the meat of the debtor hospital’s argument, Judge Brown agreed that the SBA had violated Section 525(a) of the Bankruptcy Code when it denied the debtor hospital the opportunity to have its PPP application considered simply because it was a debtor in bankruptcy. Importantly, Judge Brown concluded that the PPP could be characterized as a grant program, and, therefore, the debtor hospital had demonstrated a likelihood of success on the merits of its Section 525(a) claim. In so concluding, Judge Brown emphasized that “[t]he CARES Act is not a statute enacted to increase the availability of commercial loans. Rather, the CARES Act is a grant of financial aid necessitated by a public health crisis.” She also highlighted the fact that “[t]here are very few PPP eligibility requirements under the CARES Act, and no underwriting mandates.”

There are some obvious patterns emerging from those cases in which the courts have found for the bankrupt debtors and against the SBA. First, the fact that the CARES Act does not explicitly limit bankrupt debtors from applying for or receiving PPP funds, but that the SBA has implemented rulemaking establishing such limitations, is highly concerning for courts with respect to the argument that the SBA has exceeded its authority.

Second, the notion that the SBA is administering a grant or support program, as opposed to a loan program, is driving findings that the SBA’s attempt to rewrite PPP eligibility requirements to exclude bankrupt debtors is both arbitrary and capricious and a violation of Section 525(a) of the Bankruptcy Code.

We will continue to watch how these cases develop. If you have applied for or are considering applying for a PPP loan, and you have filed or are considering filing for bankruptcy as an avenue for financial relief, please contact our team at Bailey Glasser for assistance.